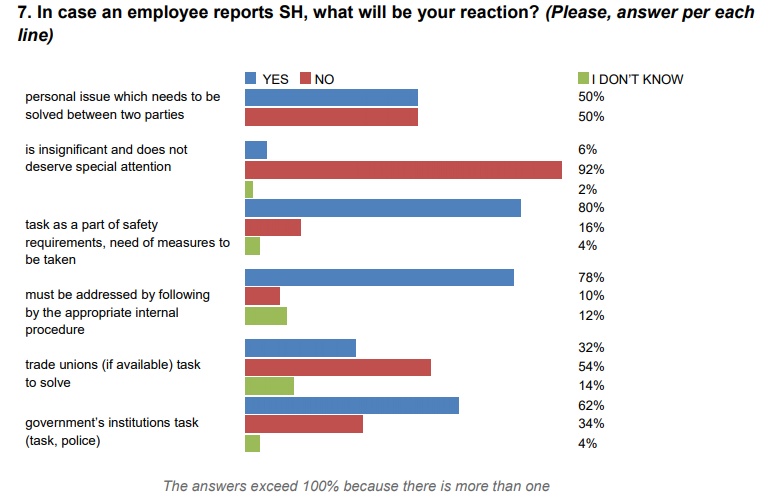 SHW* - sexual harassment in the workplace

The total number of employers and department heads who took part in our survey is 50 - 62% are women and 36% are men.

The respondents occupy: a high level leading position (22%), medium level (50%) and low level (28%). According to the type of ownership of the company/organization, 32% are representatives of the public sector, 66% of the private sector, and 2% are representatives of companies with mixed ownership. According to the number of employees, the surveyed persons are managers in micro and small enterprises up to 50 employees (31%), in medium -22%, and in large over 250 persons - 16%.

A number of studies and international standards report that the most common forms of violence in the field of work are: mental violence (verbal harassment, insults, abuse), sexual harassment and physical violence. According to the management team of all the listed forms of violence, mental harassment in the workplace is the most common (62%), physical violence is ranked second (18%), and sexual harassment is third (2%). When asked how the seriousness of the SHW problem is assessed, more than ¾ the management team considers it to be very or to some extent serious. This gives grounds to assume that the respondents assess the importance of the problem at a high degree. The managers from the private sector have predominance in the assessment of the seriousness of the problem (63.6%), while in the public sector it is almost twice lower (31.3%).

There is a strong discrepancy between the opinion of employees and managers regarding the assessment of the measures taken by the company/organization.

According to managers, 48% are adamant that the company has taken sufficient measures to prevent and respond to SHW and for 36% the measures are to some extent sufficient. A positive assessment dominates the management team, while for employees this assessment is on the opposite pole. For about 36.8% of the employees, the management team rather is not committed to measures to prevent and combat sexual harassment. 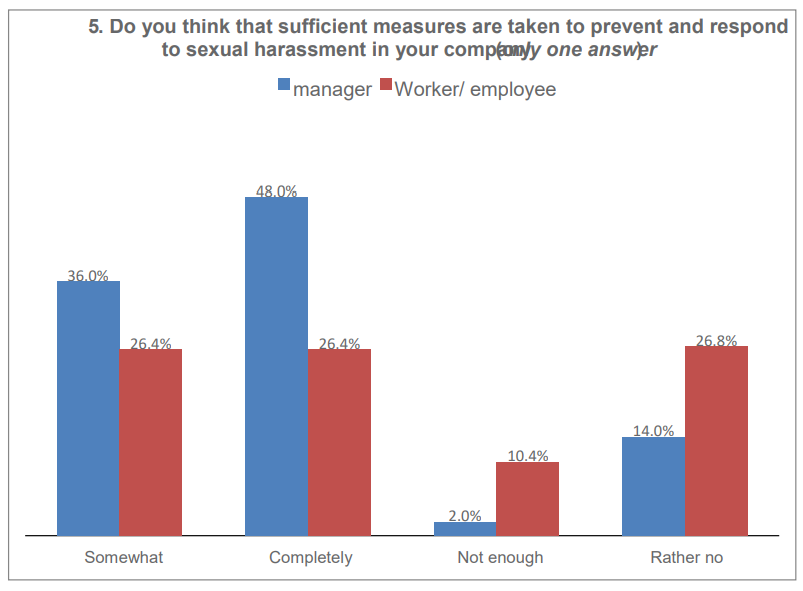 An important factor in expanding the scope of the phenomenon is the work environment.

It is the employer/manager who sets the general tone of behaviour and outlines the environment in which to work and what the relationships should be. The behaviour of the employer/manager imposes the behavior of everyone else. 42% of the management team share the opinion that the style of management can provoke manifestations of discrimination and SHW. It should be noted that for 14% of the managers this is not possible. Employers/managers have a key role in seeking and taking measures and actions to protect, prevent and eliminate violence and harassment in the workplace. The employer/manager is the person who has the power to establish rules and punish the perpetrators in the event of their infringement. Even if there are people with deviant behavior and striving to achieve their goals through violence, the employer is able to influence such behavior.

According to the PDA the employer is obliged, together with the trade unions, to develop measures that are preventive and do not allow any forms of discrimination and harassment in the workplace. What is important is the extent to which they are sensitive to the problem and prioritize it in their agenda.

The survey show that 50% of the managers accept SHW as a personal problem that must be resolved between the two parties. For 92% of the managers the problem with SHW is important and deserves special attention and for 80% measures to address the problem should be sought in the OHS program or by following appropriate internal procedures (78%). This means that managers are aware that the responsibility for the decision on reported SHW cases has to be assumed by the employer and follow the internal rules written out by the management.

The data from the study show a low level of reporting from victims or witnesses of sexual harassment in the workplace. Only 2% of the management team say that the management of the company has received such a signal, but another 20% do not know about such signals, given the confidentiality of the problem. For ¾ of the managers no such signal has been received, which gives us ground to assume that victims are afraid to report because an action taken against them is not always recognized as sexual harassment or other form of harassment. In addition,

many victims of violence and harassment do not take legal action because of their poor chances of success or because they are afraid of repression.

As already mentioned in the opinion and assessment of the employees, the problem of violence and sexual harassment at work is not on the agenda of society. Bulgarian law obliges the employer to develop procedures to be followed in cases of harassment or violence, which must include:

The obligation of the employer to pay financial assistance to the victim of violence and harassment in order to provide the necessary treatment is agreed according to a pre-approved procedure.

Taking into account the provisions in the Bulgarian legislation, the data from the survey of managers show that for 44% there are no specifically developed company policies against SHW in the enterprises/organizations. According to them, specific measures are set out in the company's anti-discrimination policy, incl. by gender (26%), also in the Rules of Internal Order Discipline (28%), and in the Code of Ethics and Internal Procedures against Abuse and Violence (26%). 42% are adamant that there are no special reporting procedures. For about 40%, the development of a SHW reporting system is part of the general procedure for reporting breaches of internal order and discipline.

Only 10% say that there is a box for anonymous signals, opened at certain periods of time.

For more than half of the management team there is no reporting of SHW cases (56%) and only for 22% there is an internal reporting system. In respect to procedures for action in case of SHW reporting, the confidentiality of the reporting person has the highest weight (68%); conducting an internal investigation and impartial hearing has 46%. The victim is referred to specialized services - psychological help (36%). 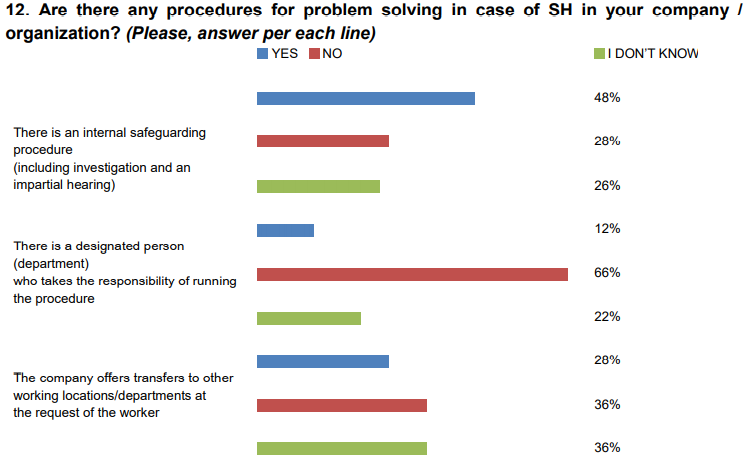 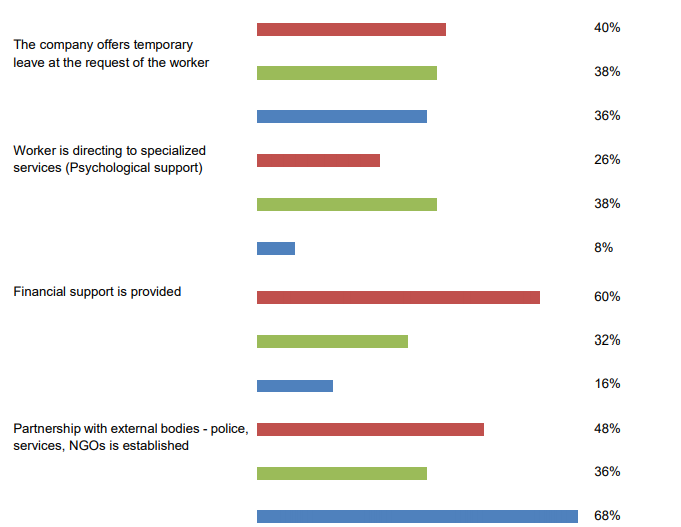 Similar to the opinion shared by the employees, for more than half of the respondents from the company management team no preventive measures against SHW have been introduced. 30% claim the availability of preventive measures limited to the provision of brochures, flyers and others, to promote anti-SHW policy.

1/3 of the managers share that they work together with trade unions and seek their support and assistance through negotiating protection clauses in the CLA (14%). In addition, they rely on trade unions to report on acts of SHW (20%).

It is worrying that managers do not see sense in training at company level as a form of raising awareness, prevention and protection from SHW (40%).

Regarding the content of the training modules, both workers and employers put at the highest level topics related to raising awareness about SHW and its harmful consequences (90%), the current national legislative framework (96%), rights and obligations of the manager and the employee (92% and 90% respectively), company procedures and mechanisms for signals and complaints (82%). More than half of the managers state that under these conditions they want to be involved in activities to raise the awareness of the employees in the fight against SHW (52%).

The content of this publication represents the views of the author only and is his/her sole responsibility. The European Commission does not accept any responsibility for use that may be made of the information it contains.