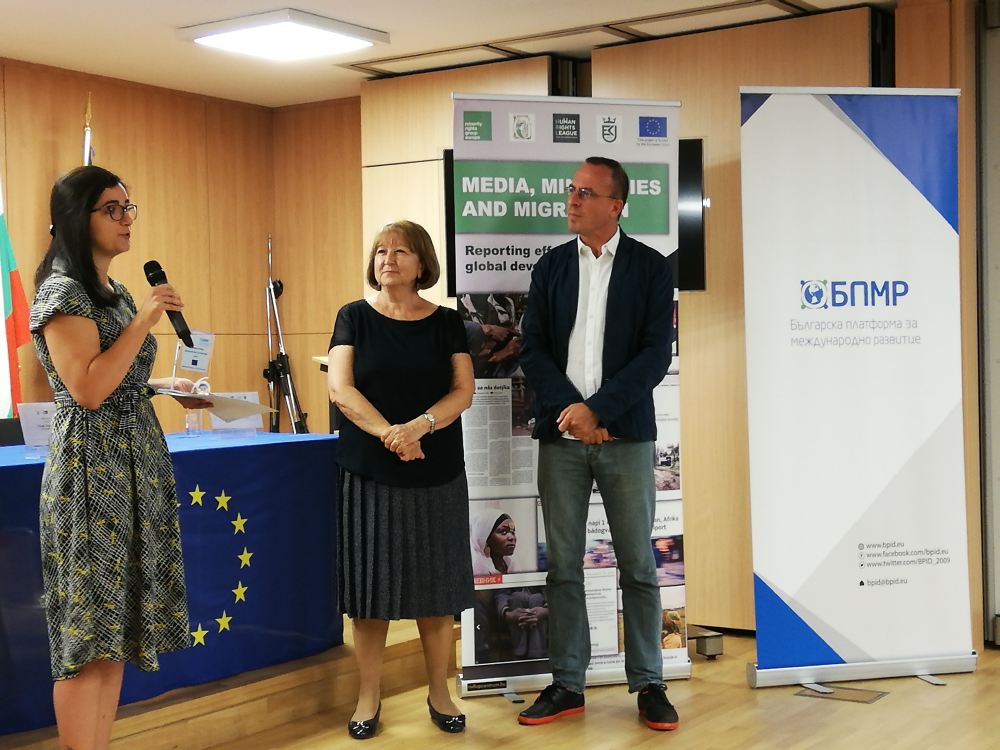 Increasing challenges for minorities and indigenous peoples - this is the conclusion of yesterday's presentation of Minority Rights Group (MRGI) 's Minorities and Indigenous Peoples 2019 Annual Report: A Focus on Climate Justice. The annual "Journalism for Development - 2019" awards were then presented.

Representatives of the academic community in Bulgaria, experts from Center for Sustainable Communities Development and the Bulgarian Platform for International Development, and many journalists gathered at the House of Europe to discuss the forthcoming climate challenges for our country and the world.

Special guest of the event was Anna Albot, representative of the international organization, author of the report. She answered a number of questions during the discussion, provoked by the presentation of Prof. Maria Neykova on climate crises and that of Veselina Foteva - journalist and author of the Bulgarian article in the report. It addressed the Roma community's problems with coal mines in the town of Pernik.

The audience was curious as to how journalists were choosing which areas to explore climate issues and whether there are some latitudes preferred or not. According to the audience the topic of climate crises is gaining popularity and it is important to see what is Bulgaria's place globally and how we could solve local problems while at the same time treating our country as part of the global world. The topic of minorities in Bulgaria and the increasing risk of ever-increasing migration due to climate change were also widely advocated.

At the end of the event, it was time for the long-awaited awarding of the winners of the “Journalism for Development 2019” Awards. Peter Buchkov, Executive Director of the Bulgarian Platform for International Development, welcomed everyone involved in the competition and emphasized the participation of popular names by the leading media in Bulgaria.

The winner of the competition was Desislava Mikova, who applied with her stories from the island of Lesbos, published on the site https://toest.bg/ immediately after traveling under the program of Minority Rights Group International to the island. Second place went to journalist Anna-Maria Konova from BTV Media Group. The third prize went to Asya Chaneva - editor of the program "Alarm" on the Bulgarian National Radio - program "Hristo Botev". Honorary statuettes, certificates and cash prizes were presented by the Director of Gender Project for Bulgaria Foundation and the bord member of the foundation - Ivan Nachev.

The event ended with sharing of optimistic visions about the future of Bulgaria in terms of climate justice and a cocktail in honor of the winners!