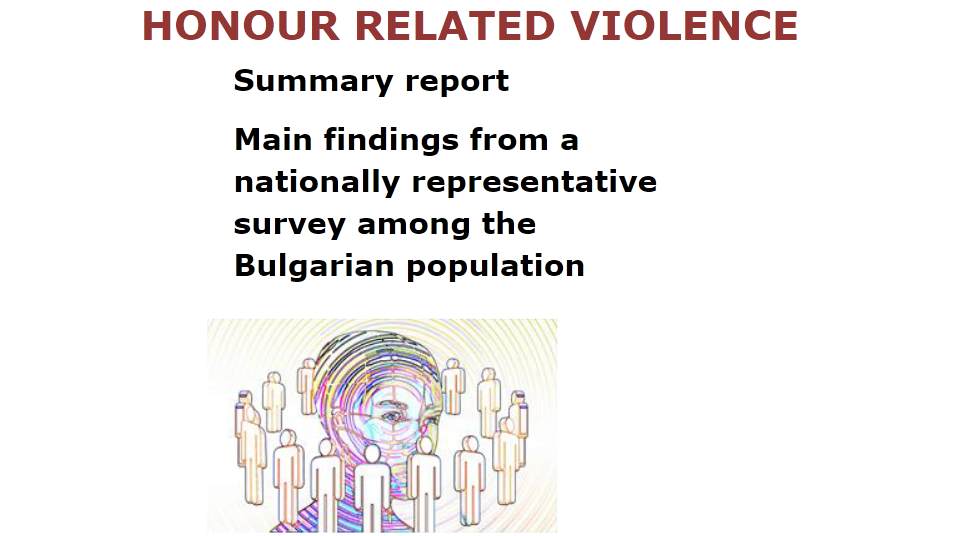 This shows a nationally representative study of the population on the basis of face-to-face interviews and in-depth interviews with experts, conducted by Association “Korektivi” under the „Social and legal action to combat honour related abuse“ project. Here are the details:

The sample has the following structure:

From the study it becomes clear that the impact of traditions and communal moral norms on individual behavior is much stronger among the ethnic groups that are different from the Bulgarian – Turkish, Roma, Armenian and Jewish. With the increase in age and decrease in educational level attained there is a larger share of people for whom communal traditions are crucially defining for their behaviour.

The most vulnerable in terms of organisation of family life are those people who strictly adhere to their roles and duties in the family and are unaware of their rights as citizens.

Relationships in the family are an indirect indicator that can help to ascertain which social groups are most at risk for acts of honour-related violence and in particular, its most widespread form in Bulgaria - early marriages. The groups that most strictly abide by traditions and allow them to determine their individual behaviour are the ethnic groups different from the Bulgarian – Roma, Turkish, Armenian and Jewish. When it comes to indicators with a focus on different forms of inequality, the group where such an unfair attitude is present are the Roma. Other demographic groups at risk are those with low income and of low educational status. It comes as no surprise that it is the older generations that more frequently stick to traditions and try to transmit them to future generations.

The results from the nationally representative survey confirm the observations made by experts in the course of the conducted in-depth interviews that the most “problematic” form of honour-related violence in Bulgaria are early forced marriages.

The survey has found out that a combination of risk factors foster honour-related violence acts. These are the low educational level of the victim, marginalisation of the social group combined with adherence to extremely traditional way of life. The lack of unanimous position and understanding of early marriages both among experts and the general public may pose a significant problem in the fight against honour-related violence. In fact, it may hinder public awareness campaigns on the nature of the phenomenon.

Interestingly, 12% of the survey participants actually imposed restrictions or prohibitions in cases where they felt that family honour was at stake.

It turns out that the emergency telephone number (112) and the police are the institutions in whom citizens have the highest level of trust and to whom would direct a report concerning a situation of honour-related violence. If they become victim to honour-related violence, 41% of the population in the country would share this information with a relative whom they trust vs. 37% of the citizens who would alert the police. The high share of people willing to confess about the cruelty with relatives is a manifestation that people misunderstand the nature of such acts of honour-related violence. This form of violence is generally committed by family members. Thus, sharing with a close relative may further aggravate the problem.

The full version of the study can be found here: Download in PDF