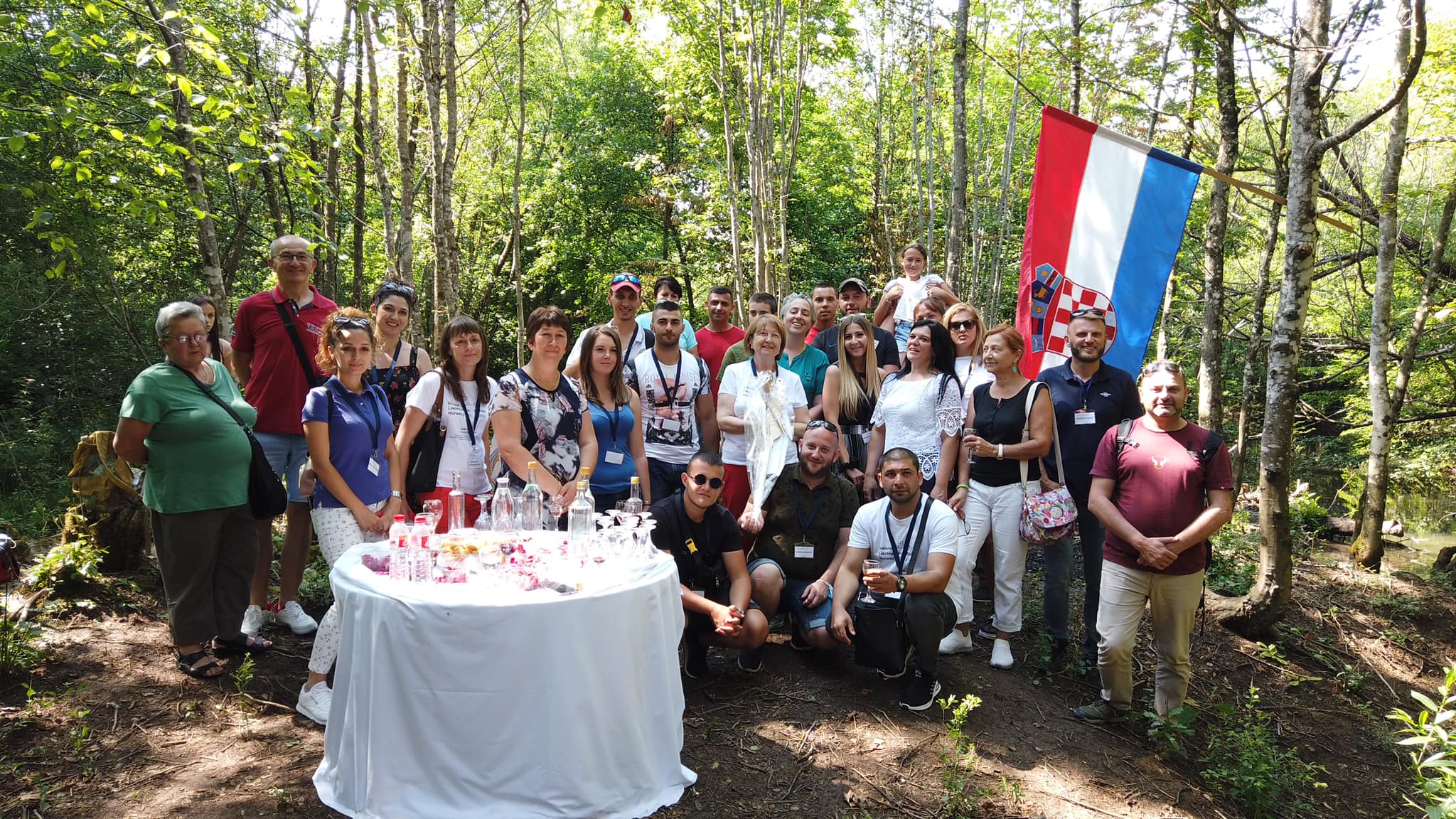 17 people from Pernik District went on a working visit to Croatia under the RAISE Youth project between 18 and 25 July.

Among them were the team of the Regional Youth Center-Breznik, representatives of the municipal administrations of Pernik, Radomir, Zemen and Kovachevtsi and the business in Pernik District, as well as young people participating in the project.

The Croatian hosts had prepared not only a cultural program, but also many useful practical trainings and visits to local tourist and agricultural sites, wineries and others. in order to exchange experience.

Among the highlights was a visit to the mayor of Gospic - Carlo Starcevic - who presented his vision for the region's development and efforts. From the meeting it became clear how big a role local government plays in the development of local business, culture, tourism and social development. The municipality is extremely supportive of the RAISE Youth project and they are implementing a number of ideas together. Among them is vertical agriculture, which can be applied very successfully in mountainous and urban regions, where there is not much fertile land. The Croats agreed with the team of the Center for Development of Sustainable Communities to exchange knowledge and experience in this technology so that it can be applied in Bulgaria as well.

The working visit to Croatia was busy but productive. With a very rich program that started from the first day.

In the presence of a local guide, the representatives of Bulgaria visited some of the most emblematic landmarks of the Balkan capital. Attendees got an idea of ​​the rich historical and cultural heritage. Especially memorable was the visit to the city museum collection - Hrvatska kuća "Materina priča", which brought together typical household items, as well as traditional clothing, handicrafts and traditional ritual symbols.

The second day of the visit began early in the morning with a tour of Gospic. A little later, the team from Pernik District had the opportunity to see one of the most visited tourist sites in the area - the Memorial Complex "Nikola Tesla" in the village of Smilyan, where the birthplace of the Croatian physicist is famous for his contribution to widespread use. of alternating current.

Various sites in the field of tourist services and agro-agriculture were also visited, where the participants from the trainings of the Regional Youth Center had the opportunity to gain valuable knowledge for starting their own business in the above.

Among them, Luka Zuzinic's family campsite, located at the foot of the Velebit mountain range, aroused interest. The place has long been known among locals for its innovative "Hobbit Houses", successfully renamed Crobit Houses! They are dug into the ground, and their vision is inspired by Slavic mythology. Zuzinic told interesting stories about the origin of the idea and how it has become a successful and working model for attracting tourists from around the world to a non-traditional mountain place for tourists.

At the end of the day, a dairy farm was visited in the town of Ostarije, maintained by the local district authority (county) and providing employment to a large number of people from the community - again in a region far from the sea part of Croatia, which entices the bulk of the workforce.

The third day began with a meeting at the Taise Youth Center of the leading project partner - GTF. The hosts told about the beginning and development of the project so far, consisting in supporting and supporting innovative youth ideas with a focus - tourism, sustainable agriculture and IT technologies.

The team from Bulgaria visited several other interesting tourist sites in the region, including: the cathedrals in the town of Gospic and the village of Bukovac Perushichki, Grabovacha Cave Park and others.

The intercultural and educational exchange continued with a visit to Ivan Vlajnicic's family business. Since the beginning of 2009, it has been a registered producer of brandy and sells products in limited quantities on the Croatian market. A year later he started repairing an old building in his yard, which was specially adapted for the production and storage of 11 types of brandy. The most famous of them are plum, quince, pear, apple, honey and others.

On the fourth day of the visit - to get acquainted with a really good and profitable tourist site - the group from Bulgaria had the opportunity to visit one of the biggest attractions in Croatia - Plitvice Lakes National Park. It is located in the Lika region and covers an area of ​​about 300 square kilometers, with more than 70% of this area being forests.

The hosts from GTF said that every third foreign tourist in their country comes to see the turquoise lakes. The reason for the increased interest lies in the active state policy for promotion and advertising of the site, as well as in its good management and administration.

On the fifth day, the delegation from Pernik District participated in a joint informal working meeting on the Raise Youth project. The plans for development of agro-agriculture through the introduction of innovative practices and models were discussed at the meeting.

After the working meeting at the Youth Center in Gospic, the guests from Bulgaria visited the Center for local species of fish and crabs from karst waters in the town of Otočac. Among his activities are scientific and professional research of indigenous fish species and crustaceans from karst waters. It deals with both their genetic profile and other important features in the process of fertilization. The center is a popular tourist destination for foreign and domestic tourists.

The day of our team continued with sightseeing of other sights from Croatia such as the river Gatska and the old flour mills on Mayer's spring.

The last day of the visit offered a visit to one of the ancient cities of the Balkan state - Zadar.

Zadar is the historical center of Dalmatia, as well as the main political, cultural, commercial, industrial and transport center in Zadar County (district). The most developed industries are tourism, transport, trade, agriculture, fishing and metalworking. Banking is also developed. The city has an international airport and a business incubator, which was also part of the program of our delegation.

"Innovative Zadar" was founded in 2003 as a business incubator with the main goal to promote the development of micro, small and medium enterprises in the city of Zadar. The initial idea, which is still in full force 18 years later, is consulting and administrative assistance to young entrepreneurs in starting their own business. They are offered to rent office space at a bargain price.

Today the incubator in Zadar consists of 28 business premises of different sizes and purposes. The local municipality pays the rent to a few start-ups: 80% before the first year, 60% in the second and so on until the 5th, when the company has to leave the incubator because it is supposed to be on its feet.

The team from Raise Youth Center - Breznik, together with the representatives of the municipal administrations in Pernik District, also visited the ecological winery "Shkaul", whose owner is Shime Shkaul.

It is located in the interior of Zadar, in the heart of Ravni kotari in Nadin. The winery has won numerous awards for product quality, the same being recognized by leading world and Croatian oenologists. In order to achieve the best quality of the wine, the vineyards are treated according to the strictest standards for organic production. Each bottle of wine bears an eco-label. An interesting fact is that in 2013, Shime Shkaul's winery was visited by the Swedish royal couple. According to protocol, they were supposed to stay for 45 minutes, but they were two and a half hours amidst Shime's wine and sweet-spoken talk.